The International Creative Arts and Craft Network (ICAC) of Testimonies Media Group (TMG) in collaboration with the Zimbabwe Prisons and Correctional Service (ZPCS) will host the inaugural trendy designs fashion gala at the Meikles hotel in Harare on Saturday.

Speaking about the event TMG chief executive, Mercyline Mutarisi told NewsDay that the creative mind is at the core of the success of fashion industry which underpins the sustainable development of Zimbabwe.

“We believe a creative mind is at the core of the success of fashion industry which underpins the sustainable development of our nation. The inspiration to host the fashion event is drawn from the words by President Emmerson Mnangagwa who is on record rallying the nation to be united with a vision of becoming a middle income economy by 2030” she said.

The event is meant to explore possible partnerships between the ZPCS and the corporate world, with a view to promoting viable income generating projects that underline a paradigm shift from its closed to open prison initiatives towards rehabilitating inmates to be innovative and self-sustained.

“The gala seeks to provide a relaxed platform where key decision makers exchange notes with players in the fashion industry deliberating on ways to forge strategic private-public partnerships for possible economic development as Zimbabwe remains open for business” she said.

While notable successes have so far been registered, there is still need to address challenges that are faced by the players in the whole clothing industry value chain.

“Micro and small to medium enterprises (MSMEs), women and youths in the Arts industry and in Fashion industry in particular, have an important role to play in the industrialisation of our national economy and in a manner supplementary to deliberate efforts of our government towards tapping into the entrepreneurial zeal” she added
The joint venture between the ICAC network and ZPCS is inspired by the government commitment on prioritising economic development, hence the theme of the fashion gala: Networking for Business Success: Harnessing Passion for Fashion.

To be a non denominational media organisation of international acclaim, providing development oriented products and services that cater for the total person.

We aim to build a total person who is development oriented. This will be achieved through our commercially feasible, innovative, educative informative and entertaining reporting. 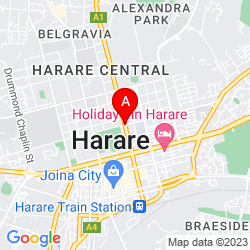